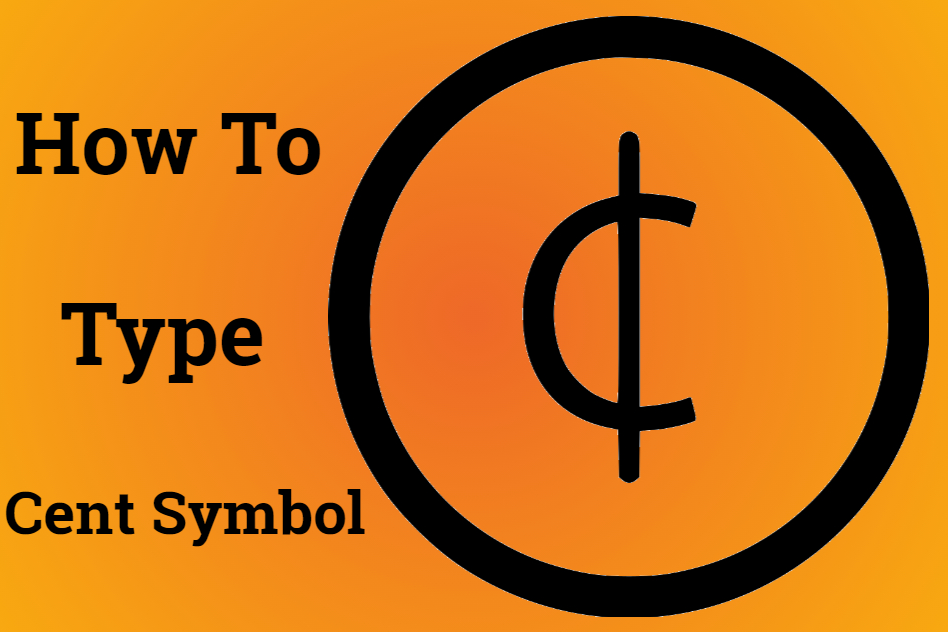 The Cent Sign or Cent Symbol is the monetary unit representing a cent. To indicate that a number represents Cents, it is placed after the number. This post will discuss Cent is, how to type the Cent Symbol on the computer, Shortcuts (Alt Codes), Cent Sign using Microsoft Word, Excel, and Mac OS.

A cent is a monetary unit of currency equal to one-hundredth of the central currency unit in many countries, i.e., 100 Cents = 1 Dollar. It is represented by the symbol ¢. It is derived from the Latin word “Centum,” which means Hundred.

One cent also means a penny in the United States. Besides the U.S., this symbol is also used by many other countries. It appears differently depending on the font used.

The cent sign is a commonly used symbol for cents, frequently used in price listings and advertisements for amounts smaller than $1. For example, 52 cents can be written as 52¢ as well as $0.52. Other cent-like units, such as Mexican centavos, can also be written in this way.

It often looks cleaner to write a value in cents using the cent symbol rather than doing a cents-to-dollars conversion with a leading zero amount of dollars. Cent symbols aren’t found on most keyboards, so they can’t be typed directly by pressing a labeled key.

It is, however, part of Unicode, which is the international standard for representing text on computers, smartphones, and other digital devices. In other words, most modern machines can display a cent sign, and there are ways to enter it digitally.

ALT Codes are used to type the cent symbol on personal computers using Microsoft Windows OS. ALT Codes are typed by holding down the ALT key on the keyboard while typing a number.

How to Type the Cent Symbol in MS Word

You can type this symbol by clicking on the ‘Insert’ tab and selecting ‘Symbol,’ and choosing ‘Latin -1 Supplement from the Subset dropdown. Multiple symbols are displayed for quick and easy typing.

How to Type the Cent Symbol in Microsoft Excel

Here are the steps you can follow to type the symbol in Microsoft Excel:

How to use Character Map for Typing Cent Sign

The Cent Sign can be found by selecting different fonts and scrolling. When the pop-up screen appears, click on the Select button under the Sign or Symbol. Click the Copy button beside the Select button. This makes a copy on the Clipboard, and you can use the Paste option or ‘Ctrl V’ on any program to get the Cent Symbol.

How to Type the Cent Symbol on Apple Mac OS (macOS)

On macOS, you can do it with a shortcut key. Press ‘4’ while holding down the ‘Option’ key on the keyboard. You can also use Apple’s built-in Character Palette utility, formerly called Character Viewer.

The cent symbol has many uses, particularly in business and finance. Whether you’re an entrepreneur who wants to use the cent sign to price an item or simply someone who wants to save space in your documents, you’ll learn how easy it is to type the symbol on your computer or mobile device.

If you have problems with any of the methods in this article, or if you can’t be bothered to try them, you can simply copy the cent sign and paste it into your document.